The site on which the church stands has been a place of worship since 1515. It is a Grade 2 listed building which was completed in 1871 and was the work of architect Richard Drew.It is a fine example of Victorian architecture and workmanship
This present church building dedicated to the Most Holy Trinity was consecrated on Monday 5 June 1871 by James Lord, Bishop of Manchester.

The Church bell is the seventh heaviest out of almost one thousand in the Diocese weighing in at 23 hundredweight, 2 quarters and 4 pounds (1195 kg) according to John Taylor of Loughborough’s records,who cast it in 1876. It is the largest bell hung on its own i.e. not part of a peal

Over the last 14 years the church has undergone massive restoration in order to restore it to its former glory. The work included the complete re-pointing and re-roofing of the Choir Vestry, Vicar’s Vestry and Organ Loft. Incorporated within the scheme was the treatment and replacement of all defective roof timbers and the rebuilding of walls below kneeler stones and sloping copings with stone to match the existing bed and stone type. 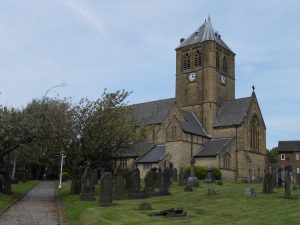